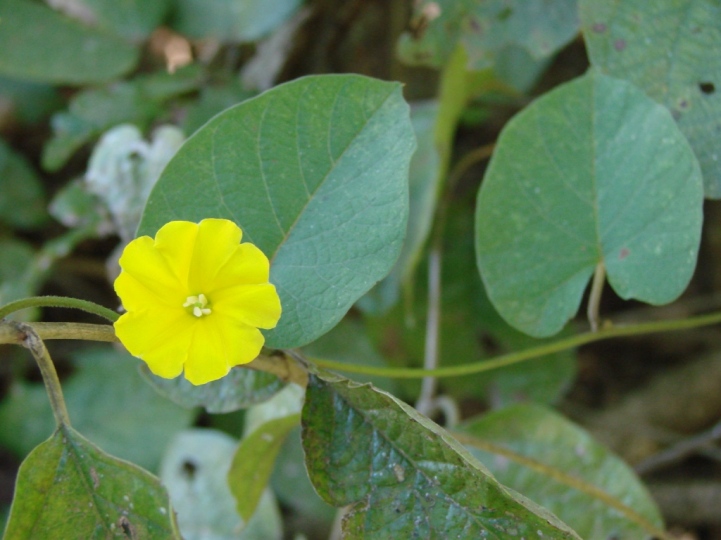 Also known as hogvine,or yellow wood rose, Moradilla is a thin, slightly woody vine growing a maximum thickness of 2 cm (0.79 in). It is a climbing or creeping vine sometimes attaining 5 m in length. Stems are slender, cylindrical, green or copper-colored, with a pair of spiniform projections at the nodes.

Where does it live?

In disturbed areas, on roadsides and in pastures and vacant lots, at lower to middle elevations. Also on Vieques, St. Croix, St. John, St. Thomas, and Tortola; throughout tropical America.

Why is it here?

As with many of the plants in these boxes, Moradilla is a woody vine native to the island of Puerto Rico. According to a 2014 study by the U.S. Department of Agriculture such vines are thriving in the era of climate change, also known as the Anthropocene. As conditions have changed (drier summer months, warming trends that affect the timing of flowering and fruiting plants, etc…), these vines have begun to supplant larger native trees. The resulting loss of overall biomass has meant less Carbon Dioxide (CO2) captured by the fauna of the island, and thus more CO2 in the atmosphere, and thus faster climate change. Think of these plants as yet another “canary in the coal mine” of global warming, symbolic of changes taking place all over the globe. We have turned our thoughts toward Puerto Rico specifically in response to the Ghost Fishing anthology and its call for “eco-justice.” Hurricane intensity and frequency is on the rise as the planet warms. The same social, political and economic systems that have energized those storms has already ensured- through a long legacy of colonialism and racism-  that they will land hardest on those least responsible for climate change. Hurricanes Sandy and Maria are exhibits A and B in the case for fighting for eco-justice. We hope you will not forget this, and that you will join in that fight.

A decoction of the plant is said to act as a diuretic, and is useful in treating rheumatism, neuralgia, headache, etc. The leaves are used in the Moluccas as an emollient for abscesses and ulcers. In Bengal the seeds, soaked in water, yield a mucilage which is used as an aperient, and as an alternative in cutaneous diseases.