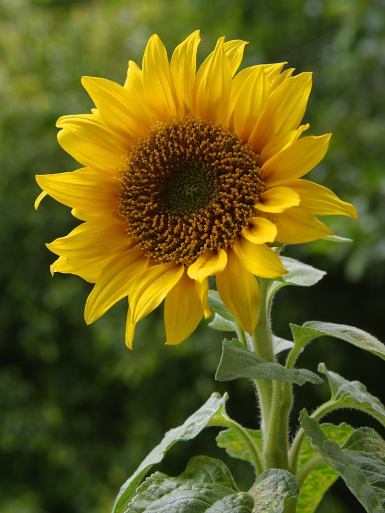 Sunflowers are usually tall annual or perennial plants that in some species can grow to a height of 300 cm (10 feet) or more. They bear one or more wide, terminal flower heads, with bright yellow ray florets at the outside and yellow or maroon (also known as a brown/red) disc florets inside. Several ornamental cultivars have red-colored ray florets; all of them stem from a single original mutant.

Where does it live?

Helianthus is a genus of plants comprising about 70 species. Except for three species in South America, all Helianthus species are native to North America. The common name, “sunflower”, typically refers to the popular annual species Helianthus annuus, or the common sunflower, whose round flower heads in combination with the ligules look like the sun. This and other species, notably Jerusalem artichoke, are cultivated in temperate regions and some tropical regions as food crops for humans, cattle, and poultry, and as ornamental plants.

Why is it here?

We’ve chosen to plant the Sunflower as a symbol of the resiliency of the natural world, and the hope that this inspires in us. In addition to being an incredibly useful plant for human societies, with whom they have a long and multi-faceted relationship, Sunflowers are Earth-Healers. They are frequently used to extract toxic ingredients from soil, such as lead, arsenic and uranium, and used in rhizofiltration to neutralize radionuclides and other toxic ingredients and harmful bacteria from water. They were used to remove caesium-137 and strontium-90 from a nearby pond after the Chernobyl disaster, and a similar campaign was mounted in response to the Fukushima Daiichi nuclear disaster.

A common misconception is that flowering sunflower heads track the Sun across the sky. Although immature flower buds exhibit this behaviour, the mature flowering heads point in a fixed (and typically easterly) direction throughout the day. The uniform alignment of sunflower heads in a field might give some people the false impression that the flowers are tracking the sun, but this alignment results from heliotropism in an earlier development stage. Young sunflowers orient themselves in the direction of the sun. At dawn the head of the flower faces east and moves west throughout the day. When sunflowers reach full maturity they no longer follow the sun, and continuously face east.